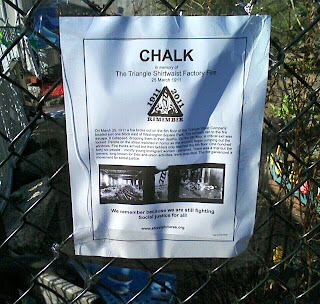 Friday, March 25 marked the 100th anniversary of the Triangle Waist Factory fire, where 146 people (almost entirely women) were killed when a fire broke out at the Triangle factory. The women made shirtwaists, a blouse that tucked into the long skirts of the time, giving a more defined look that matched the new style in tailored-looking shorter skirts (they ended just above the ankle, quite daring at the time).

The women in the factory were locked into their 9th floor work are by owner, to discourage theft. Surrounded by yards of cotton fabrics, combustible dust, and open buckets of oil used to grease the machinery, when the spark ignited it took only a few moments to build into an inferno.

One point worth noting: when unions were formed for better wages and work conditions (not an easy task in itself), they were men's unions. Women had to form their own unions, and they were understandably angry that men didn't see them as a part of the struggle for safe working conditions and decent wages. My grandmother was a member of the International Ladies Garment Workers Union, founded to advance the cause of women garment workers such as those who jumped out of the windows of the Triangle Factory on March 25, 1911. 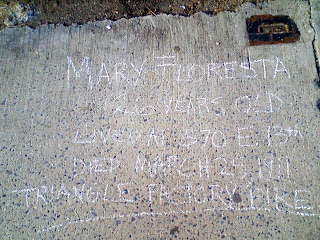 The Chalk project, above, was undertaken to commemorate those killed in the fire. The volunteers went to the place where a lived and marked the sidewalk with chalk. Above is one of the markers, a few blocks from my apartment:

Triangle Factory Fire
Posted by dianeb at 8:39 AM