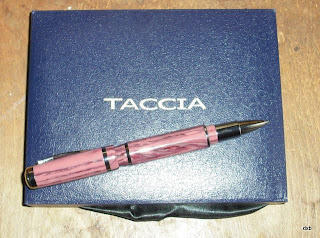 Adding to my collection of rollerball pens is the Taccia Strata, a new addition to the Taccia family of fine pens. I'd seen the line at Art Brown and had talked to the representative a few times, most notably at last Spring's National Stationery Show where she recognized me from the day before at Art Brown's semi-annual pen fair. When I saw her again at the Fountain Pen Hospital's pen fair a few weeks ago I stopped to say hello. Turns out she's familiar with my neighborhood, and we talked about the new Costco in Manhattan and the great hotdog-and-soda-deal the store offers. She then introduced me to Taccia's Strata line, which includes rollerballs and fountain pens. 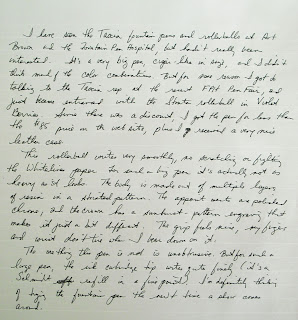 At first I thought this was an ugly looking pen, but I didn't want to seem rude so I heard her out and gave the pen a try. And I found I liked writing with it, and was hooked. I wasn't in the mood for a fountain pen in this particular line, as it just seemed too chunky, but I definitely liked the rollerball. My favorite color was the Violet Berries (one of three looks--Niagara Falls, which is blue and cream and looks like falling water and foam, and Moss Green), so I ended up purchasing that one (and because it was a pen fair, there was a discount and I received a leather pen case that will hold at least four pens). The Ink Flow has the Taccia Strata line, while I've never ordered from this e-tailer the price is very low and the seller seems like an established company.

The Strata is made of layers of resin, which give it the unique, varying striations that can look like a waterfall or lichen or a field of berries. It's a smooth writer, and isn't as heavy as it might look. The cap has a sunburst pattern on the jewel, and the appointments are polished chrome and add a nice touch. The shape is interesting--capped it's a chunky, cigar style pen, but posted there's a nip between the end of the pen and the cap that gives it an almost hourglass shape. It's a great rollerball, a bit more than I would normally spend but really worth it.
Posted by dianeb at 7:00 AM