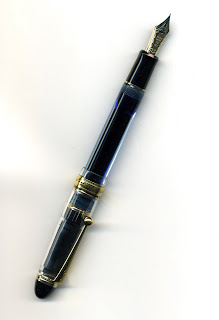 Just as Passion at The Pen Archives could marry JetPens, I have an enduring love for Namiki fountain pens.

I had read about Namiki years ago in a fantastic book by Florence Scovell Shinn, a well-known illustrator from the turn of the 19th century through the 1920s, and an equally well-known New Thought practitioner through her death in 1940. (New Thought would be roughly analogous to what we now call New Age, with a lot of focus on prosperity and abundance practices) Mrs. Shinn wrote in one of her books that she bought a Namiki fountain pen, probably in the 1920s, and every year on the anniversary of her purchase she would receive a letter from the company asking after the pen. Such dedication impressed her, and me as well, and so I had to have a Namiki. But which one? 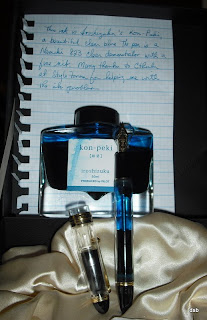 It's a complicated pen, which I didn't realize at the time I bought it. The sales rep neglected to mention that the tail plug needs to be unscrewed in order to send ink through to the feed. Several times I ran out of ink and couldn't figure out why, until one of the StyloForum folk helped me out. Filling the converter is also an interesting experience, combining my natural clumsiness with my aversion to putting the nib and feed all the way into the bottle of ink. With the Namiki Custom 823, the nib and feed turn quite easily and can be (gently) pulled out of the section, leaving the barrel with the converter open and able to put the ink in using an eyedropper and gloves. For me, inking up this way is much easier although the first two times I didn't wear gloves, and that Iroshizuku ink is unforgiving in its pigmentation and tenacity on the skin--doesn't wash off, it wears off after several days.

This fountain pen can hold a lot of ink, and given that it's a clear barrel and cap the ink you choose really becomes a part of the whole visual experience. I'm wondering what the pen would look like with Diamine Pumpkin or Noodler's Widowmaker in the converter, how that much bright orange or red would look in the pen. The 14k fine nib is a joy to write with, it just glides over the paper without the scratchiness or tooth that I've had with one or two other pens. There are a few irritants, perhaps the only one that's noticeable is that there is some ink creep on the nib which leaves small drops inside the cap (the cap actually has a black lining down most of the length so ink drops don't show, but some ink does get into the clear area and is easiy seen).

Also, I've noticed when cleaning out the ink that the barrel does retain a slight blue color; as I was immediately adding more Kon-Peki, I didn't see whether this was a permanent coloring of the clear barrel or just a temporary situation. But I will say that the Namiki Custom 823 Clear Demonstrator is worth every penny, and is now my special "go to" fountain pen. Besides the 823 Clear and Amber pens, Namiki will be introducing an 823 Smokey color sometime early next year, and I'm looking forward to seeing that one.
Posted by dianeb at 7:06 AM