Not As Easy As It Looks: Spencerian Update 1

Theory of the Spencerian System of Penmanship In Nine Easy Lessons uses 237 questions and answers on Signals, Positions, Movements, and Form to teach the 9 Principles of writing. Along with the Theory are 5 workbooks to practice forming letters and numbers. After reading through the Q & A, I went to the workbooks and started copying using my trusty Lamy Al-Star fountain pen with a fine nib, and loaded with one of the De Atramentis red wine inks. That's when the fun began.

Lesson 1 (at the top) was on the straight line, which is designated simply as "1" and is simple enough. Lesson 2 (directly above) was on the curved line, with the right curve designated as 3 and the left curve as 3. I found myself making these curves and thinking "2, 2, 2, wait no that's a 3, 3, 3." Uhmm, okay not great curves but not too bad.

Then we get into more interesting shapes, such as the letter "i" which is 2 (right curve), 1 (straight line), 2 (right curve), dot. I was able to do the 2-1-1-dot in my head for a few seconds, then began intoning "eye-dot, eye-dot, eye-dot." Both cats, napping on the bed, raised their heads thinking I was offering some prayer to Lady Bast, the cat goddess and their patron. Or maybe I was about to get up and feed them crunchies? No? Heads slowly lowerer back down, and then I noticed the admonition on the worksheet: please do not shade. Well, I wasn't shading, at least not in public...? Oh, wait--shading can be done on the strokes of the lines with a flexible nib, but in this case is not allowed for beginners learning to write. That problem would be more likely with my Namiki Falcon II with its soft fine nib rather than my hard-as-a-nail Lamy fine point, so I'm still in good standing on the "no shading" issue.

On to the next sheet and "ui" (above), which is 2-1-2-1-2-dot, and the warning to avoid unequal spacing and keep the lines parallel. In my mind I'm thinking "2, 1, 1, equal spacing, careful of that curve, what number am I on, dot now? wait, stop, stop, STOP!" Easier to just think "you then eye then dot," "you then eye then dot." After that came "iw," which is actually much easier to write and has a nice little loop on the end of the lower case "w." But per the worksheet, please avoid unlike turns! 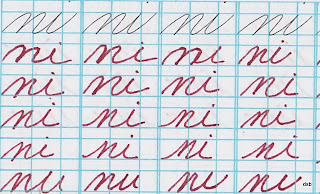 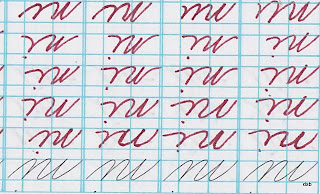 Hey, this is getting easier. My spacing is more even, my curves and straight lines are looking good, and the characters are reaching the same height. Go Me! Until I read the top of this worksheet more carefully: "The accuracy of this copy may be tested by inverting it." Huh? Okay, let's see it inverted. Oh. Ahh. Hmmmm. Even the most generous of viewers would say this is not a winner. Back to practice.

Finally, although I have some 15 or so more pages of letters to practice in the first workbook I decide to end with something easy, the letter "x"--which is 3-2-3-2. But it's tricky, because the first 2, a right curve, is somewhat reversed, as is the second 3. No doubt the author also realized this, as he included a note for those in need of help with the "x," albeit a tad snarky in its singling out of those people:

Another method of making the x, preferred by some, is to lift the pen after forming the first half, then put it down even with the top turn, and one-third space to its right, and complete the letter....

I've never really given much thought to the teaching of writing, how one actually learns cursive, or Spencerian as it is known here. I do have memories of learning cursive, but that was repetition rather than reasoning. I don't think I could actually lay out the steps to explain how--and why--letters are formed. So if nothing else, this first Spencerian lesson has taught me a lot about the thought behind the method. I appreciate my pens much more now, and am looking for some pencils and beginners writing worksheets to play with.
Posted by dianeb at 6:54 AM