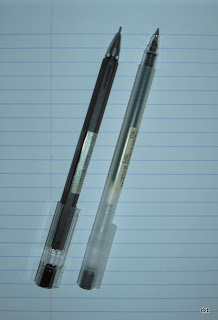 Stopped by Muji on W. 19th Street to pick up some pens and saw this Hexagonal gel ink pen in the usual wide range of colors for $3.75, somewhat more than the Classic Muji gel ink pen reviewed by the Pen Addict. The Hex has only a few differences from the Classic that might account for the price increase, but it was an interesting looking pen and as I don't have a hexagonal gel ink in my collection I thought I'd give it a try. 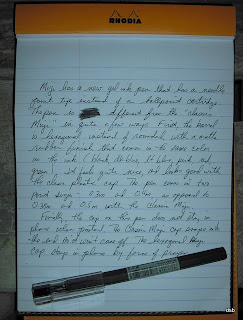 The differences between the Muji Hex and the Classic Muji are mostly cosmetic. The Hex has a hexagonal, solid-colored, matte rubber barrel in the same shade as the ink (black, dark blue, light blue, red, pink, green, orange) rather than a frosted plastic round barrel. The Hex's cap is clear plastic with a colored cap while the pen itself is more of a needle-point than a ballpoint like the Classic Muji. Finally, the Muji Hex comes in two point sizes: 0.3m and 0.4m. The Classic Muji also has two point sizes, but they are slightly bigger: 0.38m and 0.5m. If you like a finer point, the Muji Hex is for you.

Like the Classic, the Hex is a smooth writer and the 0.4m has a nice fine point that doesn't disappear into the paper. The only negative to the Hex is that the cap does not snap into place when posted as it does with the Classic. The only thing keeping the cap on the end of the pen is your good wishes, which may not be enough if you have to move suddenly. While I prefer frosted to matte, the Hex is quite a bit edgier than the Classic in every sense of the word and will be a great addition to my pen rotataion. Another color, like pink or orange, would also add some fun to using the Hex rather than staid, mourning black.
Posted by dianeb at 7:02 AM