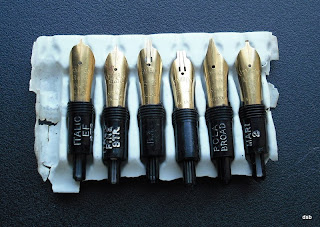 I spent a good part of a Sunday morning walking around The Garage, a flea market held on Saturday and Sunday from 9 to 5 at, what else, a garage located on 25th Street between 6th and 7th Avenues. There's an amazing variety of items for sale at different booths, including lots of vintage clothing, posters, books, jewelry. But I was on the hunt for fountain pens, and that seemed to be the one category lacking at The Garage. However, at one of the tables I found this pack of six fountain pen nibs for $10. They are Osmiroid nibs, which I'd never heard of--six nibs total, a nice selection of two broad nibs (the B3 and B4, which look like music nibs), two italics, a broad point, and one called "Mari 2." Once I got home I did some googling and found that the Osmiroid company was founded around 1918 but had roots in the fountain pen and nib industry dating back to the 1820s. 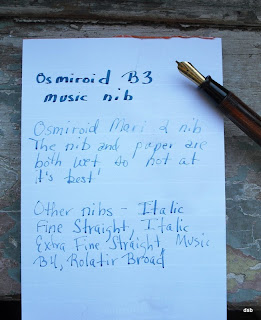 These nibs seem to be made for the Osmiroid '65 and '75 fountain pens. A little more googling and I was pleased to learn that these nibs will fit in Esterbrook pens with a lever fill system. So I pulled the nib out of my Esterbrook and started trying out the Osmiroid nibs, which do fit perfectly. Unfortunately, my girl cat Seranne also liked the nibs, and while I was preoccupied for a few minutes with something else she decided to play with the B3 nib. The nib mostly survived, but the right side tine was slightly bent and I've been doing a little repair work trying to get it back into place. I've only tried out two of the nibs, the B3 and the Mari 2, and definitely like these. They are really flexible nibs, more so than I've ever used before, and I can't believe how far the tines move apart when I put point to paper.

For some reason, the nibs feel like they are pulling to the right--as if the right side is loose or slightly bent, even though that's not the case. But I notice that the right side of the nib "leans" and I'll have to do some additional playing to get used to the way the nib feels. Perhaps this is how a flexible nib feels? Or maybe it's just me and the way I'm holding the pen. But with other nibs, all hard as nails, I don't feel that pull to the right. Strange, but not so irksome that I don't use the nibs.
Posted by dianeb at 7:00 AM