Book Review: A Flaw in the Blood 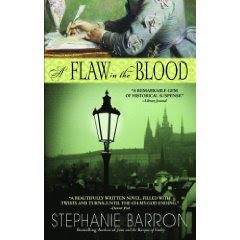 Stephanie Barron is the author of the popular Jane Austen mysteries; in 2008, she came out with a new whodunit featuring Queen Victoria, A Flaw in the Blood. The mystery to (eventually) be solved is the death of Albert, the Prince Consort and light of Victoria's life.

The story begins on the evening of Albert's death in December 1861, and the death is attributed to typhoid fever. Patrick Fitzgerald, a lawyer, is called to Windsor by the Queen; along with him is his ward, Georgiana Armistead, the first female physician (un-degreed) in the UK. (That is a nice piece of fantasy, done well enough so that it doesn't get on the nerves; the first acknowledged woman with an MD was Elizabeth Blackwell, who received her degree in 1867.) Fitzgerald refuses an order from Victoria to disown evidence he discovered in a case 20 years before on a man who tried to kill Victoria, and soon he and Georgie are fleeing to the Continent for their lives.

If this hadn't come out in 2008 I would have thought it Barron's first effort rather than her sixth or seventh book. The beginning is a very slow start, scenes change with lightning speed with little in the way of explanation or sense. The main characters are slightly more than one-dimensional and predictable, while the supporting cast is more interesting and you want to learn more about them (such as Princess Alice). And Victoria's narratives are the epitome of whining, spoiled brat, so much so that you begin to appreciate Albert's fortitude and canniness at making himself her Angelic Being.

But there are clues that begin to wind around your mind until you can't stop reading, and a question behind it all that starts you wondering. There were moments when I found myself wondering if that actually happened, and marking down a few histories on Amazon to follow up. The book ends on one major surprise so low-key that if it weren't practically the last lines of the book you would miss it. Despite the problems with the work, all the dangling ends are tied up quite satisfyingly if a touch too neatly.

Finally, in several key scenes the main characters take dip pen to paper to write quick notes to friends and fellows that, naturally, are discovered by their enemies. Once or twice I found myself thinking "don't write anything!" But alas, they couldn't hear me. If you've a lover of historical mysteries, A Flaw in the Blood will be a satisfying snack rather than a four-course meal.
Posted by dianeb at 7:13 AM

Email ThisBlogThis!Share to TwitterShare to FacebookShare to Pinterest
Labels: book review, other