A Pair of Pelikans 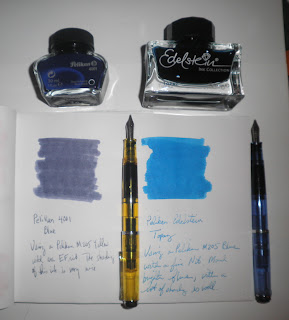 I was looking at several inks at the NYC Pen Show and saw the Pelikan 4001, which I later purchased in Blue-Black to try out with my Monteverde Invincia Color Fusion.

The two did not get along, but I wanted to see how the 4001 ink ($9.75) worked in another pen and decided to try it in a Pelikan, the M205 Clear Yellow highlighter that I bought with an extra fine nib.

Then I decided to see if next to the Pelikan Edelstein in Topaz ($20), and decided to use my Pelikan M205 Clear Blue with a fine nib, just for the symmetry.

Both inks have their attractions, the 4001 is a dark blue with black shading in it. I like the color, it's a good, everyday ink. The Edelstein Topaz is bright blue, and also shades very nicely. I'm thinking J. Herbin Bleu Pervanche might be very similar to this ink, at least on the monitor.

Both inks are a nice edition to my line up. I'll be very interested to see if any other pens aren't fond of the 4001, or if it's a Monteverde quirk.
Posted by dianeb at 7:56 AM