Three or four months leading up to the NYC 2010 Pen Show I'd found online what looked to be my dream pen, the Parker Duofold Vacumatic. At first I only knew from the eBay descriptions that it was a Duofold, then looking around Fountain Pen Network and the Parker Forum I found out that my ideal-pen-in-stripes is a Duofold Vacumatic. The only problem I had was that I could't actually determine the quality of the pen from the eBay postings, and as the Pen Show was coming up I thought I could find a Duovac I liked (and could actually touch) from a dealer there.

My wish did come true around 3 pm when I saw this pen at one of the tables where the dealer wa packing up his cases to leave (he wasn't at the show on Saturday, so I'm glad I didn't wait). I asked him about it and he was very happy to show me the pen. He told me it was in perfect condition, except that it didn't work. 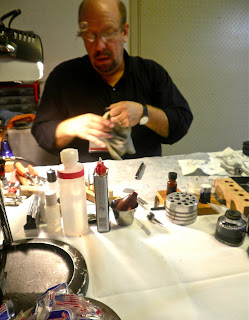 When I started to laugh he went on to say that the sac was busted so the button filler wouldn't work, but the pen barrel had no scratches, the nib was in perfecct condition, the celluloid had great transparency, and the engraving on the side was crisp and clear. All of which turned out to be true, including that the pen didn't work.

But Ron Zorn was literally 10 feet away from us working on pens and the dealer told me to just take it over to him to fix. $50 and the pen was mine. I had to come back the next day, however, as the sign up sheet to see him was already closed. (The above picture is of Ron working on my pen on Saturday morning.) 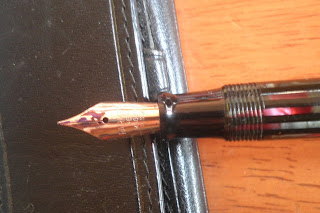 One of the best memories I'll have of this Pen Show was the look on Ron Zorn's face when I handed over the pen and told him exactly what the dealer told me--it's in pefect condition except that it won't work. Ron took the pen apart, cleaned everything, attached a new sac, sprayed, waxed, and polished the Duovac.

Was it a fine or medium nib, I asked him. Yes something like that, was his answer. Is the nib 14ct, I wondered? It certainly could be, he replied. Laughter all around, it's hard to say on a pen that has no particular markings on it. What I do know is that when he handed it over to me I was in heaven. 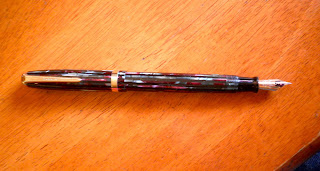 This pale blue and red striped Duovac measures 5 1/8" capped, 5 3/4" posted, and from the end to the tip is almost 4 3/4". Which would make this a Debutante model, a smaller pen to fit into a lady's purse. It's about the same size as my Pilot Namiki Impressions, which is another of my dream pens. The side engraving says "Parker Duofold Made in U.S.A." with a 2 and a dot in subscript--made in 1942, first quarter (I think). 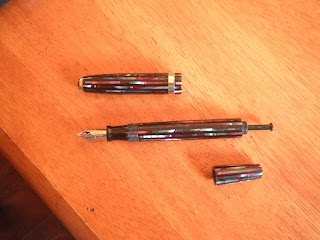 I had never tried out a button filler before, and it was a bit strange (along with several people waiting for Ron who gave me pointers on what to do, which tends to make me nervous and clumsy). Eventually the pen was filled with either Waterman or Sheaffer dark blue ink, and I was on my way. 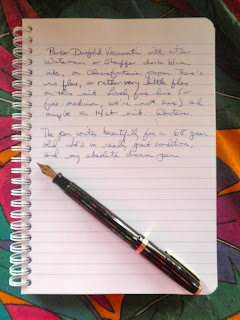 This is absolutely one of my favorite pens, and if we go by age (68 years old) it would be number one in my lineup. The nib is perfect, not much flex but not a nail either. There's some wetness to the nib, but that could be a function of the ink rather than a flaw in the pen. It's lightweight, and the celluloid has great transluscence (when Ron had taken the pen apart I got to see inside it, and the blue and red stripes are actually opaque). The line is just the width I like, and there's no scratching or skipping. It's just a fabulous pen, and I now have a Parker Duofold in my collection. 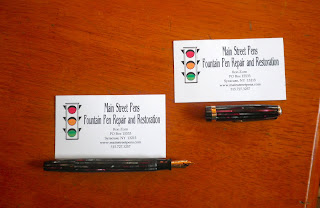 What was also impressive was watching Ron Zorn work his magic on this pen. Watching any professional at work is always impressive, but watching Ron, who clearly loves what he's doing, was just amazing.
Posted by dianeb at 7:41 AM

Email ThisBlogThis!Share to TwitterShare to FacebookShare to Pinterest
Labels: Parker