When OfficeSupplyGeek reviewed the Monteverde Invincia Black Stealth fountain pen I couldn't keep from wanting one, especially as it looked so awesome with its black titanium nib. But I really didn't want to order one unless I could try it out first, and as I didn't see any in the NYC shops I let it go.

Then Monteverde introduced the Invincia Color Fusion, and among the new colorful Invincia pens are Avenger Yellow and Spitfire Red. These I really wanted to see, but couldn't find any locally. Bu I got my wish at the NYC Pen Show, passing by the table where the courtly gentleman from Total Fine Writing was unpacking a few pens and doing a very swift U-turn to take a look at the large shiny yellow pen he'd just put on the table. 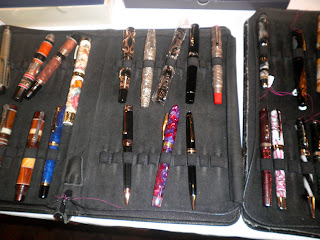 As the picture above show, the Total Fine Writing table had a lot of amazing pens on view, especially the Viscontis in the upper left.

The Monteverde Invincia Color Fusion in Avenger Yellow is my kind of "double-take" pen. It's big, and while the nib isn't really larger than some others that I own it seems to be whale-sized, possibly because it's black rather than silver or gold. That makes it seem like an extension of the section, rather than a separate part, so it gives the writing tip a longer, larger feel.

My pictures don't really bring out the yellow color of this pen, they are a touch too orange. The Avenger Yellow does have a slight orange shade to it, and the barrel has a graceful curve that adds some interesting design style. The black accents (clip, section, band, ends) are a nice touch, making this a nicely done, color-coordinated fountain pen. 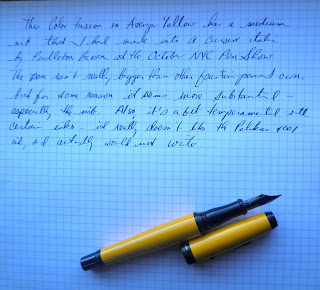 As for writing, the nib has a touch of flex to it that I hadn't expected at all. But the dealer only had a medium nib, which I'm not fond of in non-Japanese pens, so I thought to have Pendleton Brown work his magic and make this into a cursive italic. And the result is a very lovely writing style, something I like and would recommend it you're thinking of adding a little magic to your pen.

A few minuses: the plastic piece inside the cap that keeps the nib in place came loose, and often comes out attached to the pen. I've tried gluing it back, which doesn't work. It's a minor annoyance, and now the pieces seem to be behaving. But at some point I'll have to deal with this in a firmer manner (I gave up after I got glue on a few places on the barrel and didn't notice until it had dried and wouldn't come off--now the pen really does reflect my personality, lol).

Another detail I hadn't noticed is that this pen really does let me know if it doesn't like a particular ink. Pelikan 4001 is out, while Waterman seems to be high on its drink list. I'm looking forward to trying Noodlers and Iroshizuku, and possibly the new Everflo inks.

The next pen I'm thinking of trying in the Monteverde Invincia line is the rollerball that fills like a fountain pen. I've seen a few of these around, not the Monteverde but a different brand that touts the filler system, and am really curious to see how well they work. Spitfire Red would be my first choice of color, that would look amazing on its own or in my pen case next to the Avenger Yellow!
Posted by dianeb at 7:41 AM