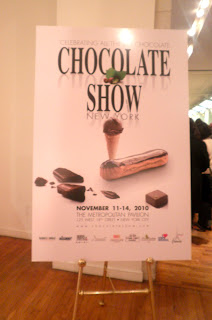 The 2010 Chocolate Show in New York City was November 11 to 14 at the Metropolitan Pavilion on W. 18th Street. Not one of the bigger shows to come to NYC, the Salon du Chocolat is certainly one of the most...luscious. 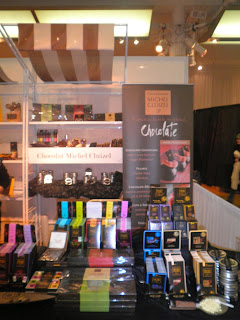 And expensive as well, with a $30 per day price tag just to walk in the door. But worth it if you know what you want beforehand. This particular booth sold the most fabulous salted caramel chocolate bars ever made (at least in my opinion), and at $9 a bar for 3.5 ounces it was actually a bargain. 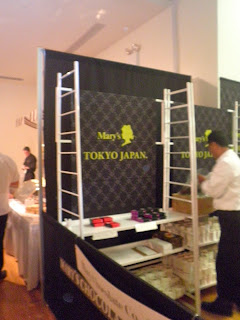 One of the more exclusive chocolatiers is Mary of Japan, which makes incredibly beautiful chocolates and sells only at their 100 or so stores in Japan. We were all looking for their ganache, which comes in interesting flavors (green tea my favorite, wasabi was interesting). A crowd of us had formed asking for the ganache, only to be told by the polite Japanese woman at the counter that they had not brought any this year. Mouths dropped, and many people actually walked away from the booth. I decided to assuage my disappointment with several small gift boxes for friends (and one for me). 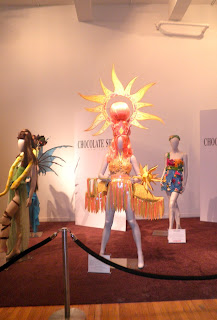 As you walked into the main hall, to the left were mannequins wearing mod clothing and chocolate accessories. 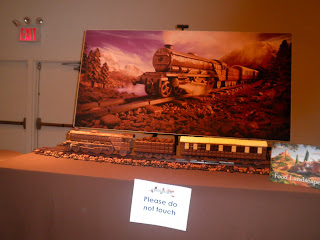 To the right was a very large train set made in different shades of chocolate. The sign wouldn't do anything against a determined, hungry horde of chocoholics, but fortunately the train was at the front entrance so security would immediately available to save the engine and maybe a wheel or two. 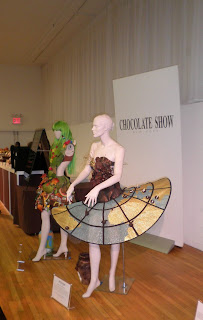 One of the events they put on every year is a fashion show using cloth and chocolate. The bustier is made out of chocolate, I think the skirt is spun sugar.

This model's long coat is made of chocolate discs of white, dark, and milk chocolate. 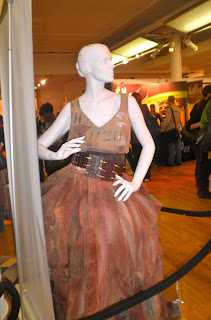 And this model has a waist-cinching belt made of chocolate pieces. 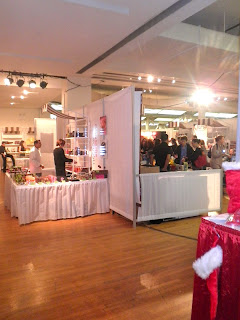 One of the galleries to the left of the entrance, filled with booths catering to chocoholics.

More to follow later in the week, including a review of Peanut Butter & Co.'s 6-pack assortment (Chili Peanut Butter sounds interesting), and a description of the milk chocolate gift box of Toffee Taboo from Sendall Chocolates.
Posted by dianeb at 7:45 AM

Email ThisBlogThis!Share to TwitterShare to FacebookShare to Pinterest
Labels: chocolate, other