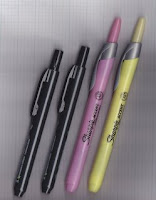 While hunting through the office supplies section at Rite Aid I came across a pack of Pentel Ultra Slim Handy-Lines, a retractable permanent marker that's also refillable. I like both ideas but especially the latter, as I really would rather not throw plastic things away. Billed as a fine point, the Handy-Lines marker is made from 55% post consumer recycled plastic and is part of the Pentel "recycology" campaign. The marker has a broad stroke, and the bleed through is spectacularly impressive--two sheets of Doane Paper were sacrificed, something I've never seen with any other marker I've tested before. Definitely a great marker for writing on CDs or DVDs or for other projects, but not for general note writing on paper.

The other two-pack that caught my eye was a set of Sharpie Accent retractable highlighters in yellow and pink. The feature Smear Guard technology, which resists smearing of many pen and marker inks. The pic to the left doesn't really capture how bright the colors are, but you can definitely see there was no smearing. I used it over the Handy-Lines marker, and almost no black ink was picked up on the highlighter tip (a yellow highlighter with black ink on the tip annoys me to no end). These will be tested against some gel and ballpoint inks, but the Sharpie Accents seems to be a great find for me as I want to highlight notes I make as well as books and magazines.
Posted by dianeb at 7:00 AM