Honestly, They Followed Me Home 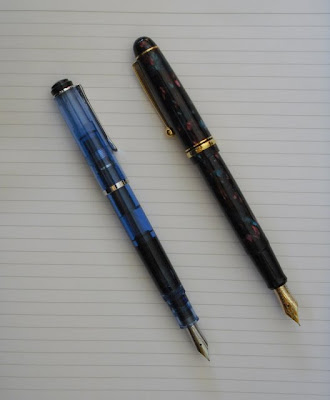 Why yes, I did attend the 2009 New York City Pen Show. How did you know? Coming into the ballroom on the mezzanie level I made it past Delta, then the Pen Club of America, but got stopped cold at Swisher Pens by a courtly Chuck Swisher and a Namiki in my favorite colors. Then it was downstairs and making the rounds, where I got tripped up by an interesting Pelikan and a gracious Fountain Pen Hospital associate who let me try out the italic, fine, and medium nibs before finally making a choice. 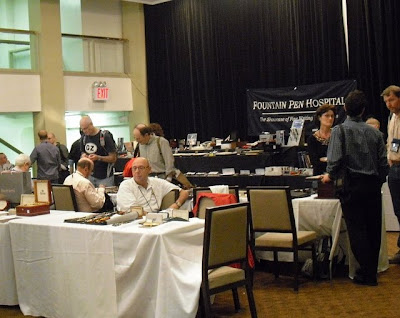 On the left at the top, from the Fountain Pen Hospital, a Pelikan Tradition Series 205 Blue Transparent Fine Point Fountain Pen. On the right, from Swisher Pens, a beautiful Namiki Fine Point Fountain Pen. My very first "good" pens, I'm still in a daze. Plus I also purchased my very first Lamy Al-Star fountain pen with an extra fine nib (from Swisher Pens) and a Faber-Castell Ambition ballpoint (from Art Brown) that I've re-rigged with a Monteverde blue/black gel ink refill that I love; those and a few new inks round out the purchases.