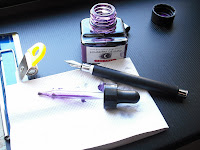 I was very intrigued by OfficeSupplyGeek's post on creating your own highlighter, especially the part about filling the barrel with ink. I wasn't too sure I wanted to mess with silicon grease, but I really wanted to try this. Then I read Future; Nostalgic's method using PTFE tape instead of silicon grease, and knew I had to give this a go. Several hardware stores weren't sure what I was talking about when I asked for PTFE tape for pipe joints, but I finally found one that had it and only charged $1 for the roll.

I decided to try it first with one of my trusty Rotring Surf medium nib fountain pens. I emptied and washed the pen and let it dry, then followed the instructions quite easily. I wound the tape counterclockwise, trying not to be too loose or too tight. Filled the barrel with water and passed that test. Finally, I filled the barrel with Noodler's Legal Blue, and everything worked perfectly. No leakage at all, and I don't have to worry about refilling a converter. I did leave a piece of tape on the side, it was pushed up during the tightening process and looks like a tag of some kind. I kind of like the way it looks, but I'm also leaving it so I'll remember what this is and not try to take apart the barrel by mistake. 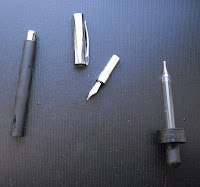 So of course I wanted to try again, this time using my much loved Faber Castell Ambition black resin medium nib fountain pen. This pen has given me some problems, because I've had a hard time finding a converter that will fit it or stay put. I love the pen but hadn't used it as much as I wanted to because of the leaky converter. I could have just gone back to ink cartridges, but by that time I had expanded my collection and kind of forgot about it. 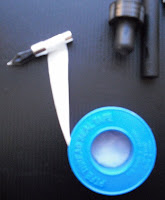 Once again, I wound the tape and fitted the barrel to the nib. But there was too much tape and the barrel got stuck. Oh well, try again. Hmmm, I didn't know the nib came out of the metal attachment, but it's got a threaded area that may leak. Let's tape that and put it back together so there won't be any problems down the line. And let's try again with the barrel. And again. Finally, on the fifth try I was able to get the two pieces together. 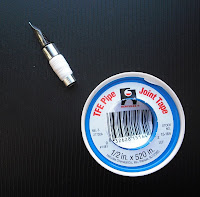 I have to admit that by that time I was really tired of this whole project and just wanted to try out my pen. So I skipped the water test (risky!) and went straight to filling the barrel with J. Herbin Poussiere de Lune ink, moon dust purple and the first bottled ink I'd ever purchased. Filled the barrel, tightened everything, and it worked. No leaks, and some fine writing.

I think for the next few days I'll be keeping these in a vinyl carryall I've got, just in case. This is so much fun, and I can't wait to try this on a few Preppy pens I bought off eBay. (The top photo is of my Faber Castell pen and the J. Herbin Poussiere de Lune ink.)
Posted by dianeb at 6:48 PM