I was looking at this Uni-ball Jetstream multi-pen on eBay for some time, and decided to give it a try. A three-color multi-pen, this luminous black pen has silver accents and a very heavy silver clip but it remarkably light. 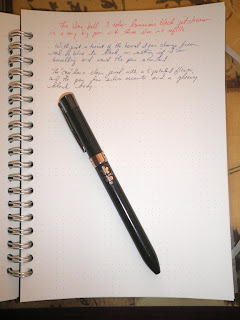 The pen tips are 0.5mm, but seem like a 0.4mm or lower--the line width is quite thin, although it is very readable and doesn't get too lost on lined or graph paper. I thought I'd try it out on my dot ring binder, and definitely like the way it writes in blue, black and red.

These are some of the nicest looking gel inks I've used: the red is solid, not pale, and stands out against ivory paper. The blue is deep and rich, while the black is dark and interesting. There's a touch of blobbing, that dreaded oil-based ink problem that leads to smearing, but nothing particularly excessive that a few extra seconds of drying won't clear up.

One detail I like is that you twist the barrel to change color, with three dots labeled black, red, blue on the silver band, with a blank space in-between when the pen retracts. I like this much better than pushing down a colored tab on the end of the pen, and with this feature I don't accidentally retract the pen with I'm writing by hitting the tab. There's a small clear jewel on the end of the cap, which is a nice design detail.

The only pen I've seen available online is at JetPens, the Jetstream F* series with two inks and a pencil feature. I'm more inclined to the three inks, which Taizo may be offering again at his eBay store. They are similarly priced, so if multis are your thing take a look at this one at either store.
Posted by dianeb at 8:20 AM

Email ThisBlogThis!Share to TwitterShare to FacebookShare to Pinterest
Labels: uni-ball