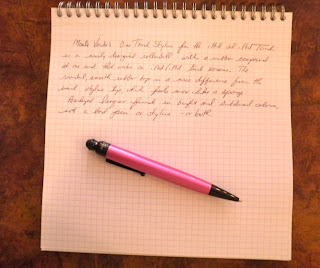 Here's a pen of interest if you have an iPad or any other touch screen device (or just want something different in your daily arsenal), the Monteverde One Touch Stylus & Ballpen. This seems to be a redesign, starting off as a ballpoint and now re-engineered as a soft rollerball (the refill seems to be a cross between a gel ink and an oil based ink). The original had a flat rubber stylus that doesn't look like it was very easy to use for anything but tapping, while this newer version has a round soft rubber end that's actually quite usable for writing on the touch screen as well as tapping out notes and whatnot.

The newer One Touch has a great pearlized lacquer finish as well, not the metallic body in the original, with a choice of ultra-vibrant (red, pink) or ultra-neutral (black, grey, white) barrel colors. The pen itself is one of the nicest I've used, the barrel is comfortable even without a grip and heavy enough to fit comfortably in the hand. The price isn't bad either, $30 plus tax for a nicely-designed pen that does work well with a touch screen device. I've enjoyed using it because I tend to work on my iPad, and tend to hit the screen with the end of my pen because I've left my capacitor-stylus somewhere else. This works well for me, now I just tap and go.
Posted by dianeb at 8:20 AM

Email ThisBlogThis!Share to TwitterShare to FacebookShare to Pinterest
Labels: Monteverde