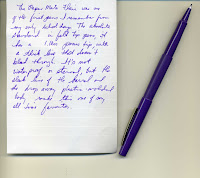 An all-time favorite of mine and one of the simpler pleasures of life, the Paper Mate Felt Tip Pen is a porous, liquid felt tip pen that made its debut in 1966 and has become an industry standard.

When capped, the hard molded plastic barrel is thick in the middle and tapered at the ends; posted, the barrel shows the indented tapering of the barrel down to the tip. I've always wondered if the top could become "mushy" from too much pressure being applied to it when writing, but that never happened as far as I remember. The tip really resists fraying and squashing--it's a Percheron of a pen, even though it looks like an Arabian.

I think I first started using these around 1970 or so, when they were the hip writing instrument. The ink isn't bulletproof and was never meant to be, but the 1.10m tip drew a thick, solid line just like a magic marker but in an elegant-looking package. The ink doesn't bleed through, and later on Paper Mate included pastel colors in the Flair line up for more choices. My favorite was always the purple Flair, so I couldn't resist getting one on a recent trip to the stationery store.
Posted by dianeb at 7:04 AM