Guest Post: The World in a Ballpoint Pen, by Jack Labusch 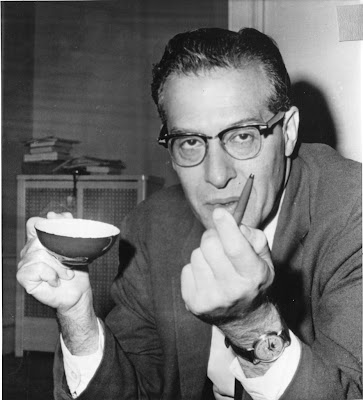 My ballpoint pen . . . that’s my laboratory!

We have a lot to thank theoretical physicists for. They’re different, though, right? Well, maybe not so much. Here’s Physicist Richard Feynman on a new malady you may recognize that he first saw in one of his Manhattan Project colleagues at Los Alamos.

“ . . . [Stanley] Frankel eventually suffered from ‘computer disease’, a preoccupation with using the computer itself rather than running designated problems on it. This disease interfered so much with his functioning in the implosion program that [Hans] Bethe in March 1945 asked Feynman to take over the computation group.” (Credit: Critical Assembly, by Hoddeson, Henriksen, et. al.)

Above is Physicist Julian Schwinger in 1965, shown in his home after winning the Nobel Prize in physics along with Feynman and Shinichiro Tomonaga. I can’t identify the pen, and the body language seems incomprehensible to this onetime salesman. Anyone want to take a shot at interpreting the photo? (Photo found on Wikipedia. The original caption reads: “His laboratory is his ballpoint pen”.)