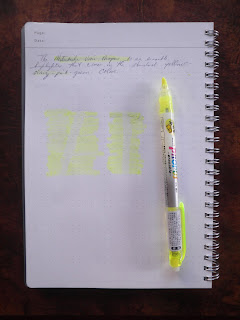 Looking at highlighters I decided to try this Uni-Ball Propus erasable yellow pen. The idea that a highlighter could be erased has a certain appeal to me, but I didn't think it would take away all of the ink so I didn't have very high hopes.

Actually, the erasing went quite well. The yellow color is more neon with a green tinge to it (I'm thinking black light), and while I needed to put a lot of pressure on the eraser it did take off the yellow ink. The eraser crumblies left in the wake actually seemed to cling to the paper a bit and took two or three brushing to clean off this notebook.

I should add that this Propus isn't smear-proof, using it with a ballpoint pen left a black stain on the tip of the highlighter and a smear on the first line. However, the stain did lessen as I used the highlighter so I'll only take away half a star.

Finally, the tip of the pen is depressed initially to get ink to flow down, then you pump every once in awhile to get more ink on the tip.

An interesting concept, and if you want to get rid of all the markings in a book to sell or trade it then this is the highlighter to use.
Posted by dianeb at 7:40 AM

Email ThisBlogThis!Share to TwitterShare to FacebookShare to Pinterest
Labels: highlighter