He Didn't Carry a Pen? 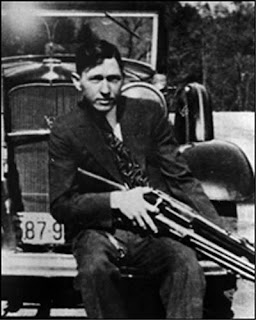 Eliza Ward sent this to me, it's a great follow-up to Jack's post on Pretty Boy Floyd and she's letting me share it.

Besides the great story, she highlights something I've noticed about myself since I started taking an interest in pens and stationery--how aware I am of any mention of writer's paraphernalia in what I read. I'm almost yelling into the void "what size was the nib?!"

Many thanks for this, Eliza!

I've been reading Go Down Together: The Story of Bonnie and Clyde by Jeff Guinn and when I read this passage I thought of your post:

"Then Clyde told his father he had some papers he wanted to sign and leave with him. He didn't say what kind of papers they were, and taciturn Henry didn't ask. Since Henry was illiterate, he couldn't read them anyway. ... After he signed them and added his thumbprint, he told Henry, they should be given to his mother, Cumie. She'd know what to do with them. But the pen Clyde took from his pocket was out of ink, and it was the only one he had brought with him. Henry didn't carry a pen--he never wrote anything, so he didn't need one. Clyde put the papers back in the suitcase and said that signing them could wait." (p314)

That happened just a couple of weeks before he was ambushed, so his parents never found out what the papers were regarding. Guinn thinks it might have been Clyde's will. Clyde's mom thought it might've had someting to do with property, since he'd been talking about buying land. Anyway, now no one knows, and it's all because of a pen!