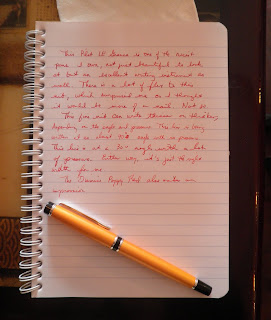 One of the truly stunning pens made by Pilot is the Grance, a slender flat top pen with a graceful curve to barrel. It's a beautiful pen, as you can see here (scroll to the middle) but unfortunately it isn't sold in the United States.

This Limited Edition Grance is in a finish called Yamabouki Koi, for the golden orange koi fish. The pictures don't quite capture the color, which isn't as deep an orange as the above would have it. The pen takes a CON-50 converter or international cartridges, and the nib (which I can't quite read, 14K something) is my favorite fine point. 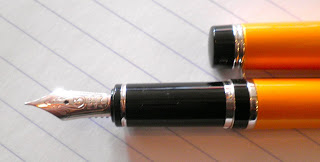 I was lucky, as I won the auction on eBay having lost twice before. This was the last time, and I was amazed when no one outbid me--the golden orange fish was mine! It makes an impression when showing off to pen people. One of my best moments was at Art Brown, when I showed it to the assistant. He mentioned that people show him their pens all day and he didn't think much about them, but this was definitely an impressive pen. He's right, it is.

The golden orange really picks up the black tip of the cap and barrel, and the silver accents don't class with the warm overall color scheme. After all this, I almost couldn't care if it skipped and scratched across the paper, but it doesn't: it's one of the best pens in my daily arsenal.

If you come across the Pilot Grance, whatever the color or nib size, try and get it. It's one of the best writing tools ever made.
Posted by dianeb at 7:45 AM