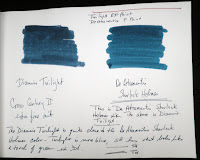 One of the new Diamine inks I really wanted to see was Twilight, a deep blue with just a hint of black in it that looked great in The Goulet Pen Company's pre-release swatches. The twilight time is a favorite of mine, so this became a must purchase. And as I had my De Atrementis Sherlock Holmes at hand, I decided to compare them.

First, the Diamine Twilight is a well-behaved ink. No skipping or nib creep, great saturation on the paper, and the drying time is okay. The color is rich and dark, and it's a great addition to your lineup. I used a Cross Century II fountain pen with an extra fine nib to try the Twilight, and was surprised at how dark the line was and how smoothly it flowed through the pen.

What I hadn't been expecting was how close it was to Sherlock Holmes, which is also a deep night blue color. The Diamine tends towards black while the De Atramentis has a touch more green in it, but at first glance they were hard to tell apart. Oxidation led to the Twilight looking a bit darker than the Sherlock, but I'm inclined to say that if you have one you might not need the other.
Posted by dianeb at 7:35 AM

Email ThisBlogThis!Share to TwitterShare to FacebookShare to Pinterest
Labels: Diamine