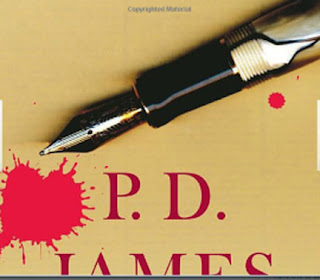 I'm currently reading P.D. James's Talking About Detective Fiction, much of which is about the Golden Age of British detective fiction that is essentially the period between the two world wars. While I might disagree (Richard Jury and Alan Banks, as well as Adam Dalgliesh, immediately come to mind), James dissects the work of the four major writers of that period (and beyond, in some cases): Agatha Christie (who James does not care for and isn't shy about saying why), Dorothy L. Sayers, Margery Allingham and Ngaio Marsh.

One particular quote from the book:

In his book Aspects of the Novel, E.M. Forster writes:

To that I would add, "Everyone thought that the queen had died of grief until they discovered the puncture mark in her throat. That is a murder mystery, and it too is capable of high development.

And I would add, the Parker Duofold on the front cover is the perfect pen for making that puncture mark on the queen's throat or for writing a mystery story about it.

I'm particularly in love with historical whodunits, such as Steven Saylor's Rome Sub Rosa Series. I also love alternative universe mysteries, such as the John Taylor series by Simon R. Green (I've read a TV series is in the works, a la Sookie Stackhouse and True Blood). Of course, now that I'm writing this all my favorites go right out of my memory. Anyone else?
Posted by dianeb at 6:34 AM