Her Name is Theia 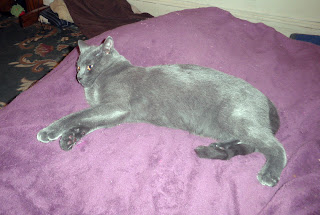 Not a great picture of her but she rarely stops moving right now. When she does I 'll have lots more to show off. She's 11 months old, an Abyssinian/mix (there's a white dot of fur on her chest and her tail has very pale black rings on it). I call her Squeaky as she is so talkative, especially at 5:30 am when she wants her can of cat food now. She doesn't seem to understand the concept of dry food, which will be difficult when I go away for a few days at Christmas. We'll see how that works out.

She's much smaller than the other two, and I doubt she'll be any bigger even though she has enormous presence. The other two cats weren't that happy when I brought her home, but it only took 24 hours for them to come around and love her. Must be a new record.

Mally is now top cat, and sets the tone for the apartment. Seranne would actually be first in line based on age, but she's more a follower than a leader (and a bit too spacey to even realize there's a hierarchy at all).
Posted by dianeb at 9:01 AM

Email ThisBlogThis!Share to TwitterShare to FacebookShare to Pinterest
Labels: other, Theia