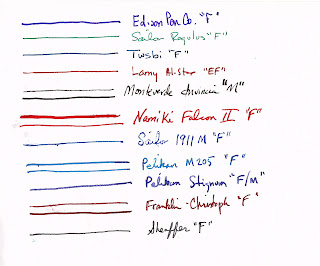 Given my penchant for Japanese fine nibs, I've been wondering how "fine" a line they actually make and what, if any, difference there might be between them. So I took out a handful of fountain pens, and stated playing with them.

The finest line is without a doubt the Lamy Al-Star extra fine nib. If that's cheating, then the next one looks like the Sailor Regulus fine. One of the wider lines is from the Namiki Falcon II soft fine. I put more flex into the top line as I wanted to see what that would look like, then put in the second line with a much lighter touch.

Pelikan's German nibs actually stack up quite well next to the various Japanese nibs, which surprised me. I thought the Pelikan nibs (and the Edison Huron Bulb Filler with an iridium steel nib) would be much wider, but they all came down fairly even in width.

The biggest surprise is the Monteverde Invincia (Stealth) Color Fusion fountain pen, which has a medium cursive italic nib. The pen looks like it could fly to the moon and back in stealth fashion without being detected, and the rather fine-looking line from this nib kind of proves it. I'm not sure if having it made into a cursive italic took the width off it somehow, but I was expecting a broader line and didn't get one. I'm now curious to see what the Invincia fine would look like next to this group.
Posted by dianeb at 7:40 AM

Email ThisBlogThis!Share to TwitterShare to FacebookShare to Pinterest
Labels: fountain pen, other