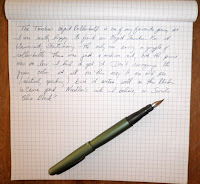 One of my favorite pens is the golden orange Tombow rollerball I bought some time back from Amazon. I had seen the fountain pens on JetPens, but really wanted to see one up close before deciding. On a recent trip to Univesity Stationery I saw several Tombow Object pens, and one happened to be a fountain pen with a medium nib. Amazingly low price and the dark forest green color which I didn't recognize made me think these had been around for some time and forgotten until I asked to see them.

The medium nib is actually quite nice, and instead of a converter I'm using Pelikan blue-black ink cartridges (something I didn't remember until I flushed the pen to re-ink it). I have to say this was the easiest fountain pen I've ever cleaned, and I don't know if that's due to the manufacturer (Tombow) or the ink (cartridge vs. converter). I can't see why a cartridge would have less ink flowing to the feed than a converter, but the assembly cleaned perfectly. Perhaps it is the ink, though I use different types and have the same problem. Some of the pens I've used take 3 to 4 intensive cleanings to get all the ink out, but this Tombow was sparkling after only one long wash. I really could not believe the feed was ink-free, but it was and I simply snapped in a Pelikan cartridge and started writing again.

One of the pluses of having the golden orange roller ball and the fountain pen is that I can move the different systems around and put the rollerball into the forest green barrel or take the fountain pen nib and feed and put it into the golden orange barrel. The Tombow fountain pen works well, didn't have much skipping or dry ink problems at all (unlike a certain Parker pen I've been using) so when I go to write I don't have to scratch the paper a dozen times and move the pen up and down to get ink into the feed.

JetPens has the Tombow fountain pen at a reduced price, so if you're thinking of investing in a great pen take a look at this one.
Posted by dianeb at 7:07 AM