Something Really Different: the NuWave Oven 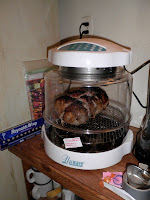 A few months ago my insomniac dad was trying to fall asleep by watching some late-nite informercials and saw something that he liked and that seemed legitimate: the NuWave Oven. He went online, checked it out, and decided to try it. (Dad's 82 and not too bad in the computer department, although I'm missing some hair from where I've pulled it out during a few of our phone sessions talking him through a problem.)

The NuWave uses conduction, convection, and infrared to cook. My dad loved using it, but found it wasn't that great for pizza or a few other things. It wasn't gathering dust, but a problem arose with my gas stove and I was in need of alternatives for the time being. So dad sent me the NuWave Oven, complete with Extender Ring kit and other goodies. If you have a BJ's near you then you've probably seen the NuWave or the Total Chef Oven, but I'm not into cooking stuff so I never gave it a thought until this massive box arrived.

I'm a so-so cook, usually the problem is inattention (had ADD been around decades ago, I would have been diagnosed as the dreamy type rather than the hyperactive kid). There have been times when I've had to get out a stepladder and turn the smoke alarm off 'cause I was making burgers and knew the cats would freak when the beeping began.

So I was beyond suprised when I tried out the NuWave and...it worked. It worked really well. The pork roast I made was exactly as I wanted it (see above pic), done but not dried out. I've been playing with this for several weeks now and can't believe how easy cooking has become, and how quick using the NuWave.

I'd rather spend my time writing with my fountain pens or reading on my iPad, but not I have a rally cool toy to cook with and that's almost as good!
Posted by dianeb at 8:03 AM