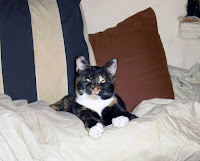 My little girl Seranne, who was about 1 year old in this pic (she's now 2 1/2). She's a stray, found walking down a street in Brooklyn and taken to a shelter where she was picked up by a cat rescue group. They estimated she was about 3 months old, and in amazingly good condition so she was probably someone's little girl. About 10 days after they found her, I adopted her.

High maintenance, and visually impaired although you wouldn't know it from all the zooming around she does in the apartment. She can also find my toes and fingers in pitch dark. But every once in awhile she'll miss her jump or crash into the wall rather than run through the door.

She has heavy scar tissue on her eyes, due they thought to her having a cold that migrated to her eyes. I remember seeing her in the adoption van and thinking "that is the ugliest cat I've every seen, no way am I adopting that one." 20 minutes later she was in my apartment chowing down on the Big Boy cat's kibble.
Posted by dianeb at 7:00 AM