Where Were You 30 Years Ago? 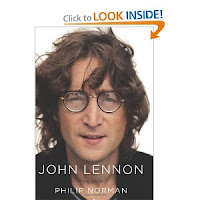 One of my favorite photos of Lennon from the recent biography by Philip Norman. It was a Wednesday just like today, I remember because it was the last day of classes at my college where I was finishing the Fall Semester of my senior year. Around 6 am or so I heard my mom and dad getting ready to go to work, and I heard my mom say "they shot him, he's dead."

My first thought was, "Reagan was shot?" It was just after the election, and made sense. But then my mom came in and told me, "John Lennon is dead." Never before or since have I gotten up from a dreamy, warm sleep so fast.

The last class for me was a Fine Arts course I was taking, we were in a small, arena-style auditorium and I was sitting in the middle area above where our prof was lecturing. We were finishing our retrospective of Fine Arts in the 20th Century when he concluded with a musical number that he mentioned was from a performer who changed the world. And then we heard the first words: "I read the news today, oh boy...."

The auditorium had been hear-a-pin-drop silent until that moment, then we all exploded into noisy conversations. Why, why, why came the same word. We just couldn't figure it out. And of course, the minute we were out of class we headed for our cars (or mine, I should say, as I was a day student and drove to school every day) for the one store at the mall that carried Playboy--because the Lennon-Ono interview had come out the day before and we wanted to get copies as soon as possible. And we did, and I still have mine at the house in Pennsylvania.