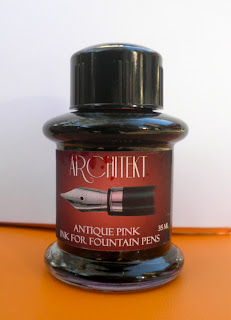 Just received my shipment from xFountainPens and couldn't wait to try the Architekt ink, which is clearly a De Atramentis bottle.  I ordered several different inks, including Antique Pink, which should correlate to their special Historic Person ink "Maria Stuart" or Mary, Queen of Scots.  Described as "antique pink," the ink was made for the 425th Anniversary of Mary's death on February 8, 1587, and I was hooked when I first read about it on the De Atramentis website.


Is antique pink associated with Mary, Queen of Scots?  No idea, and the De Atramentis web site doesn't say.  Their history of Mary ends with her husband, Lord Darnley's, death, which is the third or fourth beginning (her birth/father's death, sent to France, the dauphin's death) of her long, sad saga and not its end.

On to the color, which is definitely pink.  Indoors this looked like it had a touch of purple in it, but outside (where I took these pictures) you can see it tends more to a strawberry color.  It's definitely darker than Diamine's Flamingo Pink, which almost glows on the Rhodia bright white paper. 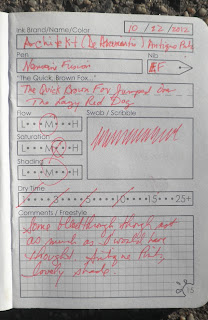 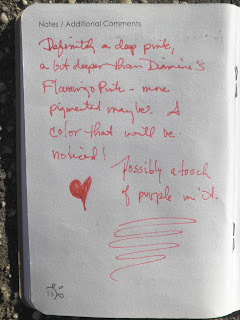 The color is vibrant, and there's a lot of shading though I couldn't quite see it at the time. I wanted to record my Antique Pink/Fusion pen combination in The InkJournal as well, and noticed that there wasn't a lot of bleed through on the paper until I colored in the heart.

Definitely I had a lot of fun with this color.  I'm not sure how much I'll use it day to day, though.  I'm in the office right now, taking notes, and I have to say there's something odd about using it on Rhodia graph paper--the violet lines seem to overwhelm the pink color.  I'll have to try it on my other papers (Whitelines, Kyokuto, etc.) to see how it handles.  I guess my first test will be when I use it for a memo to my boss!

Was there anything I didn't like about this Architekt ink?  No, but I do have a problem with the way xFountainPens shipped the order.  Two glass bottles of ink placed in a bubble mailer--nothing around them, no "fragile" on the outside of the mailer, basically the way you'd expect someone unfamiliar with USPS to mail something that could quite easily break and spill.  How this got to me intact I don't know, but I have to say it has made me a bit hesitant to order again.  I might want to put a few instructions in the comments section of the order form, particularly what their return/replacement policy is for broken bottles of ink. 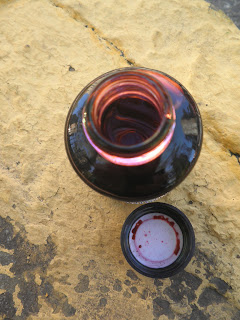 Email ThisBlogThis!Share to TwitterShare to FacebookShare to Pinterest
Labels: ink