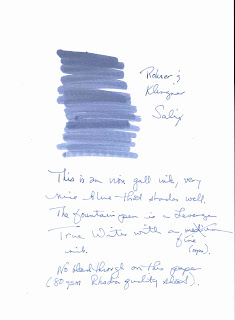 Goulet Pens recently added the Rohrer & Klingner ink line to their product lineup, and one in particular caught my attention: the Salix Blue iron gall ink. There is something about using an ink formula dating back to the 12th century that really makes me feel a bond with my fountain pen--the sheer amount of time it took to create ink, never mind how little might be made from a particular batch, indicates (to me) the strong desire of humans to communicate through the written word (as well as show off one's elite status as someone who can read and write).

Traditional Iron gall inks are corrosive, and will eventually destroy the paper as well as the fountain pen. The modern iron galls are gentler on the inside of a fountain pen, but can still be corrosive if left in the pen for a long period. So when using an iron gall ink, like Diamine's Registrars ink or Chesterfield's Archival Vault, I don't leave the ink in for more than a week or two at a time, and give my pen a more-thorough-than-usual cleaning as the iron gall ink can be difficult to remove.

Rohrer & Klingner's Salix Blue is a blue-black formula, like Diamine and Chesterfield, but unlike those two it doesn't oxidize into black but remains blue. This is really one of the more stunning blues I've used, very deep color with good saturation of the paper (which is 80gsm Rhodia-quality). Drying time is average, and there was no bleed through so double-sided writing is fine.

Definitely a great ink if you want something that's permanent and waterproof (I didn't test it, but iron gall inks seem to be waterproof so I'll take Wikipedia's word for it) then you should give this a try. Especially as the color remains blue on the paper, rather than turning black.
Posted by dianeb at 8:02 AM

Email ThisBlogThis!Share to TwitterShare to FacebookShare to Pinterest
Labels: ink, Rohrer and Klingner