Among the fountain pens I found at the Annex flea market some weeks back is this snakeskin/diamond diagonal style pen simply identified as "Vacuum" on the barrel and nib. The cap and barrel are slightly different greens, with the cap a darker green and the barrel lighter and more iridescent. I seem to recall that they were separate in the case when I found them, and likely came from two different pens that looked enough alike to make up one complete set.

The pen itself is in decent condition: the nib still has a tip, the lever was working fine, and the pen just needed a new sac and some polishing (all done by 777PenRepair). The clip and band show heavy wear and brassing, but I find some wear on a pen a feature. I think about who used it before me, or how many owners it had before I came along. 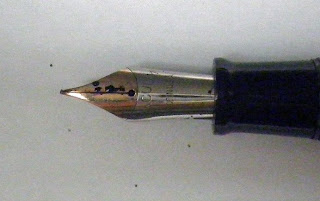 The nib is in good condition, while the entire nib/feed area just seems quite long--it's actually longer than the section and adds a nice touch to the overall look of the pen. 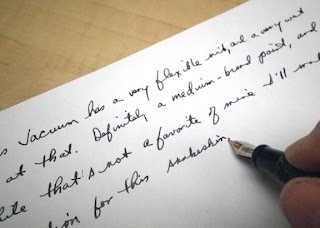 As for how well it writes, this is one flexy nib! It's very wet as well, and the line is somewhere around a medium to broad. I've filled it with Noodler's LE Boston Brahmin Black and like the way the pen and line look when I'm writing.

I haven't found anything on Vacuum fountain pens, not even old adverts. There were two I saw for sale on eBay and another auction site, but no information about the company. Likely this pen came out in the 1930s, when colorful celluloids added some cheer to a bleak and unrelentingly difficult decade. It's a great looking pen, even with the slight color difference between cap and barrel, and I'm hoping to find out more. In the meantime this Vacuum snakeskin gets a lot of second looks, quite rightly.

Update--Posted a query over at Fountain Pen Network asking if anyone could identify this pen and got this response:

Vacuum-Fil Sheaffer sub brand circa 1935. Looks like Sheaffer changed the name to WASP by 1936. I'm not sure how these are always imprinted but the pattern of yours was in use by late 1936.