Looking through Levenger's fountain pen listings I spotted this Galaxy Aurora with teal, purple, and white swirls and heavy silver accents. Very nice, but out of curiosity I went to eBay and discovered Levenger's outlet there, where they sell discontinued and returned/refurbished items. This Galaxy Aurora was listed as refurbished, so I bid and won. 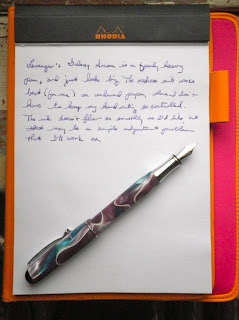 The pen I received was pretty damaged, with a bent nib and tines way out of alignment. When I tried to write I got a line that looked more like a small paint brush then a medium point fountain pen, so off the pen went for repair work.

In short order the pen came back looking great and writing like a true medium nib. While I"m not fond of that particular width, it has more to do with the width of the lined paper I use rather than the nib itself. Smaller widths make my handwriting look too large for the paper, while unlined paper is best for me to write with using a larger width of nib. 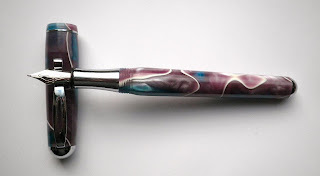 The pen itself is beautiful and fairly heavy, with a massive metal clip and section that add a lot of weight. As noted in the comments at Levenger, the converter doesn't fit quite right as the opening is slightly smaller than that of the point of the feeding tube. With some pressure it can work, but the converter does come off more easily when you're changing inks leading to spills and splotches.

One problem with the nib is that the ink doesn't always flow, so I get some dry starts and skipping. This isn't a serious problem, likely it's easily corrected and more a result of the damage and repair than an original flaw.

Beyond those quirks, this is a beautiful pen. The nib is very big to match the pen, which gives the overall impression of being quite light when in fact it is a bit on the heavy side. The color scheme is on the cool side, if you notice that thing. So if you're into big pens that make an impression, you might want to take a look at this Galaxy Aurora. Just be aware that buying one on that's been refurbished via Levenger's eBay store might mean you get a nib in need of repair.
Posted by dianeb at 8:14 AM