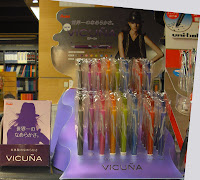 Stopped by Kinokuniya over the weekend to check out any new pens or notepads and saw this display for the Pentel VICUNA. I have to say I was rather taken by it: the display included a 12-page booklet in Japanese (to the left in the above picture) featuring a young woman in black, wearing a Michael Jacksonesque fedora, lots of black eyeliner, and pale lips. For some reason it reminds me of the Virginia Slims cigarette ads of the 70s. 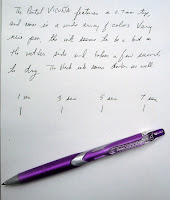 From what I could find on the internet, the VICUNA is a "three ink" pen designed with women in mind ("You've come a long way baby" for those who remember that tag line). I think they simply mean three inks were blended to make the one black gel ink used in the cartridge in the pen. I did notice when writing with it that the black ink is very dark and lays down on the paper slightly damp but dries very fast. It's a nice pen, the colors are very cute (I chose purple, but could have gone with orange), and costs about $3.

What I'm curious to know is why it's call the VICUNA (all caps)--the plastic molded name on the pen even includes the tilde (the wavy line) over the capital "N" so it's definitely Spanish and meant to invoke the Andean camelid. Uhmm...huh?

UPDATE: Thanks to @PentelofAmerica on Twitter for getting an answer to my question:
"The Vicuna has smooth, smooth wool. And the ink on the Pentel Vicuna is smoooooooth." So that's why Pentel named the pen the VICUNA. #nowyouknow
Posted by dianeb at 7:03 AM

Email ThisBlogThis!Share to TwitterShare to FacebookShare to Pinterest
Labels: Pentel