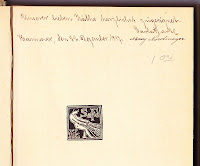 (Above) Mary (or May) Nordmeyer, Spencerian. Below the inscription, the colophon shows S. Fischer Verlag gathering popular and literary authors in its net.

The inscription appears to have been written with an extra fine nib. Faded only slightly by my guess, the ink is black, less color-saturated than today’s Private Reserve, with a slight chocolate cast. No feathering or bleeding. The consistency of color saturation throughout, and the absence of overlap strokes suggest, in my view, a fountain pen was used rather than a dip pen.

German playwright Gerhart Hauptmann had written Die versunkene Glocke, The Sunken Bell, and the above inscription was found on the book’s flyleaf. Published first in 1896 (one Web source gives 1897) by Berlin’s S. Fischer Verlag, this 1913 edition remained in near pristine condition on its remarkable journey from the Leipzig printer nearly a century ago to the university library giveaway in Youngstown, Ohio, which is where I found it a few years ago.

But, back to the inscription. My German has veered somewhere between near native speaker to tourist grade. These days it’s the latter. Still, why was a routine gloss in a book so puzzling? One word was unintelligible, possibly misspelled, or a colloquialism of the day. Another seemed to be a botched signature, of all things, because the other possibilities seemed even less probable.


I’d recruited my sister, and, armed with a Cassell’s and Duden, we set out to decipher the inscription. Here’s what we came up with:

“[To] our dear Kathy, most heartfelt blessings.
Hanover [Germany], 22nd [of] December, 1917
Carlotta Hartl
Mary [or May] Nordmeyer

My sister and I calculated we’d “earned” as “freelance translators”, hobbyists really, a small coffee each if we’d been on the clock. Freelance translators, the real ones, occupy America’s vast ghetto of high-skill jobs that pay next to nothing. How do you put it politely? The minimum-wage day laborer is likely to earn more than many of America’s adjunct professors, academic abstractors, and computer code writers.

Do you see the inscription’s mystery yet? Mary [or May] Nordmeyer’s signature is not written in the spidery German Lateinisch, but in an elegant hand that seems to be a modified Spencerian!

(Above) Fraktur type, which still suggests Merrye Olde Europe. Mary and her friends had another wartime "turnip winter" ahead, then the peacetime food blockade. Higher speed press runs, popular literacy, and increasing disposable incomes called out for more tractable typefaces.

America had declared war on Germany in April. Was Mary an enemy alien, an American citizen awaiting repatriation to the States? Was she German-born but raised in America, and found herself once again in Germany at a bad time in history? Had she travelled to Germany for school or work? What was her connection to Carlotta and Kathy? What happened to all of them?
Posted by dianeb at 7:00 AM