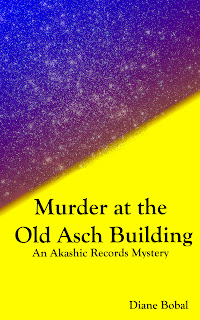 The cover for the project I've been working on the past three months. I'm publishing Thursday on Amazon, in their Kindle e-books section. Will have more details then, but I'm starting to get excited. Many thanks to Jack & Carolyne for reading parts of the various drafts.

Edit--forgot to add the synopsis.

The Akashic Records is a mystical library that records everything that happens in the universe, and contains the life stories of everyone who's ever lived. But sometimes, there are blanks.

Malley Hanson is a Keeper, part of an elite group of information hunters charged with finding missing knowledge for the Akashic Records. Her first assignment is Sophie Torresta, a factory worker who should have died in the 1911 Triangle Factory fire at the old Asch Building but who's death was not recorded.

When Sophie appears claiming she was murdered, Malley doesn't believe her but begins investigating. Strange attacks start happening at the old Asch Building, and Malley must stop a ruthless spirit who holds the key to Sophie's murder--and plans to kill again.