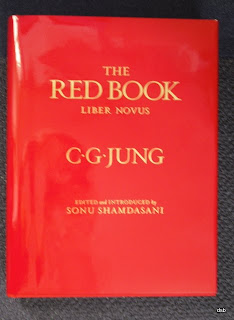 Back in early October 2009 I made my way to The Rubin Museum of Art in Manhattan to gaze upon The Red Book of C.G. Jung, perhaps one of the greatest journals ever kept that was locked away in a vault until Carl Jung's heirs agreed (after a five-year campaign) to allow it to be both published and exhibited. Somewhere Jung writes to one of his patients that she should put down her dreams and thoughts into a beautiful journal that will always be hers. This is Jung's beautiful journal

The Red Book, currently on display through February 15, 2010, is an amazing journal written between 1913, just around the time of Jung's break with Freud (an event that was among the precipitants of Jung's mental breakdown), and 1930, when he seems to have simply finished. The physical journal is about 8.5 x 11, a specially-made red leather book with pages of ivory vellum that have been scored so that writing will be even and perfectly horizontal. The Red Book actually started out as numerous journals (known as the Black Books) kept by Jung, then refined, re-written, and re-drawn into the final Red Book, the Liber Novus. At several points Jung thought of having the Red Book published, but was somewhat embarrassed by writings, which came about using the technique of Active Imagination. What was risque in 1930 seems quite banal in 2000, and Jung's heirs eventually agreed to allow publication. 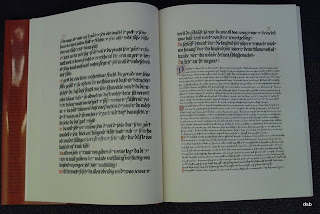 During the period in which he worked on this book Jung developed his principal theories of archetypes, collective unconscious, and the process of individuation. It is possibly the most influential unpublished work in the history of psychology. More than two-thirds of the large, red, leather-bound manuscript’s pages are filled with Jung’s brightly hued and striking graphic forms paired with his thoughts written in a beautiful, illuminated style. Jung was fascinated by the mandala—an artistic representation of the inner and outer cosmos used in Tibetan Buddhism to help practitioners reach enlightenment—and used mandala structures in a number of his own works. Jung’s first known mandala-like work, Systema mundi totius (1916), will be on display. 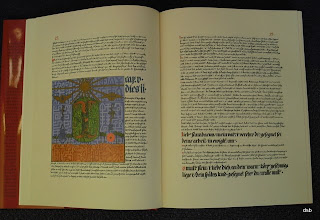 Created between 1914 and 1930, the Red Book has never before been seen in public, outside the circle of Jung’s family and very close friends. Alongside the 95-year-old volume will be a number of oil, chalk, and tempera paintings and preparatory sketches related to it and other original manuscripts, including the Black Books, which contain ideas and fantasies leading up to the Red Book. The exhibition coincides with W.W. Norton & Company’s publication of a facsimile and translation of the Red Book. 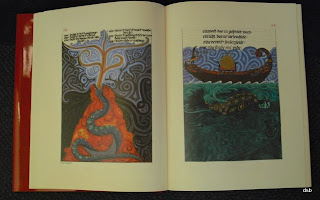 I went back in late December with several friends who came in for the day specifically to see this Red Book I'd been going on and on about. The German Gothic script and beautiful drawings (mandalas, figures, balls of light) have been made available for review and reflection, but there is nothing that takes the place of seeing the original. Jung's Red Book is in the basement of the Rubin, and unfortunately no pictures are allowed (and there are three to four guards at this exhibition to enforce that rule). 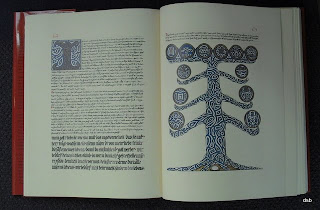 The space, which is directly below and open to a very attractive blonde-wood-and-stainless-steel cafeteria, is quite small. The journal is off to the side, while the main space is a recreation of what seems to be Jung's office space, with two copies of The Red Book available for perusal. There is something wonderful in thinking of him writing out his thoughts hunched over this desk, and I have to wonder what kind of pen he used. Along the walls of the exhibit space are sketches that Jung drew and gave to friends or used to illustrate his publications. Spending time at this exhibit made me re-think Jung and his theories, and sent me on a quest to learn about quite a few of the ideas he articulated during this period (and are found in various forms in The Red Book), most especially Active Imagination. 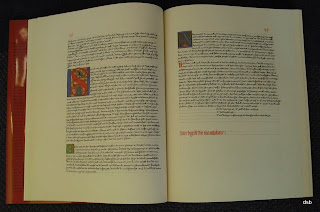 Next to the Red Book is one of the most amazing analyses I've ever read, and I'll leave it as the parting thought of this post.

The Recovery of the Soul

In The Red Book Jung tackled issues of greater complexity with several goals in mind. He wanted to understand himself and to integrate and develop the various components of his personality; he wanted to understand the relationship between the individual and present day society as well as with the community of the dead; and he wanted to understand the psychological and historical effects of
Christianity and the future religious development of the West. In addition to addressing these goals and their broad implications, the manuscript serves as a record of how Jung rediscovered his soul and overcame the malaise of spiritual alienation. He accomplished this by creating a new image of God and established a new psychological and theological cosmology.

(All pictures are from my copy of The Red Book, which weighs about 20 pounds and is the size of a small side table.)
Posted by dianeb at 7:00 AM

Email ThisBlogThis!Share to TwitterShare to FacebookShare to Pinterest
Labels: notebook, other