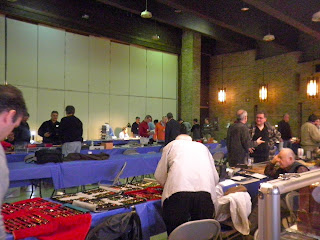 I was so busy wandering around, then guarding my place in line for Richard Binder (#11), that I didn't get as many pictures as I would have liked.

There was a dealer there (to the far left but not shown in this picture), set up on the blue tablecloth, with hand-made pens that reminded me of Edison Pen Co.'s Hudson--and some of them were clear demonstrators that were beautiful. 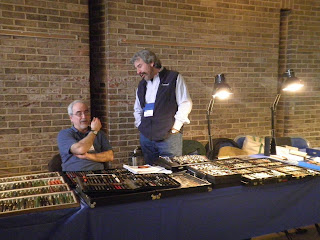 One of the dealers I purchased from (in the chair), Ron, who had an Esterbrook copper icicle in pretty good condition that's now in my collection. He also had some beautiful vintage and modern Sheaffers that I was keenly interested in but couldn't really rationalize. 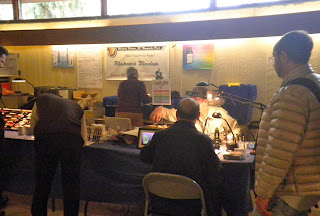 So we troop in at 10 am and everyone heads for the sign up sheet with Richard Binder (above) and Ron Zorn. I log in at #11 for Binder. At 11:30 I double back to see where things are, and see that I'm second in line after the guy on the right gets into the chair. Barbara thinks it will be about 30 minutes, so I go wander around.

What she didn't know is that the guy in the chair was buying a nib so Richard worked over the the other pens the guy had with him--5 or 6, actually. Then two guys on the sheet ahead of me decided they didn't want to go when they were called, and then came back on line right in front of me. I was finally invited to take a seat around 1 pm.

As I'm sitting there learning that I'm putting too much pressure on the nib and that's why it feels scratchy, two guys right behind me start raising their voices a bit and making lots of noise. They had agreed to switch places so one guy could go look at more pens, but after wandering around he then changed his mind and wanted his old place in line back. The guy who had gone from #18 to #12 and was right after me said no. I paid my bill, grabbed my pens, and ran. This was all over sitting in Richard Binder's guest chair, by the way. 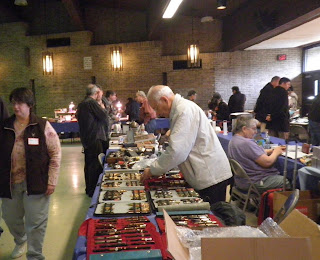 One of the tables of dealers at the show. I bought several pens, including a Parker Vacumatic azure debutante in excellent condition.
Posted by dianeb at 7:56 AM