When JetPens introduced the Pilot Prera Clear Body I had already been looking at an orange-accented one on eBay and knew I was going to be making an order very soon. One of the first things you notice about the Prera is how small it is: 4.75 inches capped, 4.25 inches uncapped, and 5.25 inches posted. With small pens I sometimes look around for the rest of the barrel, and my hands look strange (like high heels with legs, long pens seem to make fingers look less stubby and more elegant). 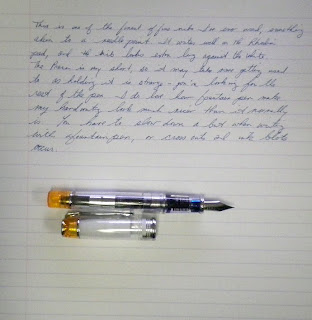 Other things you notice: the colored accent caps, which give it just a bit more appeal and making it more than a clear demonstrator; the frosted shielding inside the clear cap, which makes a nice contrast but also keeps ink splatters from being noticeable; the white embossing on the cap with the Pilot Prera names clearly identified but not overwhelming; and finally, one of the nicest clip designs I've seen on a fountain pen--sturdy but flowing, with a lot of elegance in one small detail.

Clear demonstrator pens are among my favorites, I love to see the interior of the pen as well as checking out the ink availability. Unfortunately, that also means you can see any little thing that might be an annoyance, like the ink caught between the feed and section: when filling this pen, do not dip beyond the nib into the ink, as it will get into the section and you will have to take everything apart to clean it out. Lesson learned, hopefully.

This is a fine nib but if you were looking for a similar type in a non-Japanese pen I'd say Lamy's extra fine nibs for the Safari and Al-Star models is probably the closest. It writes very much like a needle-point tip so if you like a fine to extra fine line but still want to read your notes this is a good choice.

The Pilot Prera clear body fountain pen isn't as expensive as some, but to be honest there's not a lot of pen either. The accent caps come in lots of different colors if you are so inclined, which adds both choice and fun to the selection. If you're thinking of a new fountain pen, take a look at Pilot Prera.