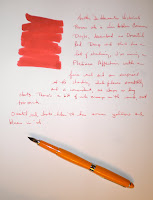 Another De Atramentis Historic Persons ink I recently purchased, as a companion to the Sherlock Holmes Night Blue ink, was this bottle of Sir Arthur Ignatius Conan Doyle. The color is Oriental Red, which should be reddish orange but looks too dark and with a slighrtly blue tinge to it.

I've included the above photo of some of my reds to show where it it on the red ink scale. The photo to the left hasn't been enhanced, but in that pic it looks more like red-orange than the above. Perhaps a difference in paper (Rhodia vs. copy paper) or light or...whatever.

There's no obvious tie in between Arthur Conan Doyle and the Oriental Red color De Atramentis chose for his ink, just as Sherlock Holmes and Night Blue ink also have no particular connection. The color is not bright like the Diamine Poppy, and I think of it as being a good editor's red, something I could see marking up a handwritten page of fiction dealing with ratiocination and hell hounds.

Like the Sherlock Holmes, the ink isn't particularly quick drying. It flows well from my Platinum Affection fine point fountain pen, and there was no bleed through on the paper (copy paper in a very pretty notebook). It's a muddy red more like claret that hasn't been decanted--something Conan Doyle and Holmes would have seen as a clue to the time of Lord Something-or-Other's death, perhaps (after the cheese tray but before the butler could do it).

Reds are hard to describe, harder to use and not make it seem as if you're critiquing something or someone. To me they're more personal, a Greek chorus in a bottle warning of lemurs. A great addition to your red collection, if you're looking for something a bit different.
Posted by dianeb at 7:05 AM